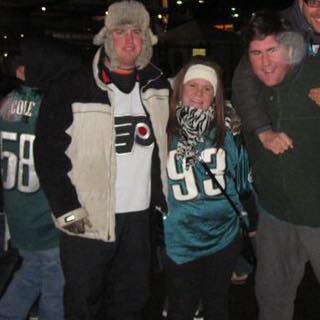 A few weeks ago, we lost one of the most exuberant humans I’ll ever know.

I don’t remember meeting Joe and I couldn’t tell you when the Neumullers went from being acquaintances to family. It all happened way before I started forming concrete memories. Since I can remember, Joe has been my brother’s best friend. They met playing tee-ball and were by each other’s sides until the end. He was my parents’ honorary son and our brother.

I’m no stranger to grief. I know how it can leave you alone for hours just to creep up to you late at night when you should be sleeping. I know that it melds days together until you forget what day it is. I know how it can disappear for a period of time then smack you right in the face.

Since Joe’s death, I’ve been trying to find the words. Any words, really. But each time I sat to write this post I gave up right away because there is absolutely nothing that I can write to convey the type of person he was. It felt selfish, self indulgent. Like I was seeking public therapy. Most of the time, it just didn’t feel like enough.

How can I possibly string words together to paint the image of someone so alive? It’s impossible. But I’ll try because it’s the only way I know how to pay tribute to Joe. I have three people subscribed via email to this blog, which means they get an email every single time I update it. One’s my mom, the other is my aunt and the last person is Joe.

Whenever I have a night like tonight where I’m restless with the memory of Joe, it’s always the same image that flashes through my head. He’s laughing. Joe had an infectious laugh. That’s a phrase that I fear being too cliche… but it really applies to him. I think I’ve heard Joe laugh more than I’ve heard him talk. He laughed constantly and uniquely. When we had his parents over for dinner before I had to go back to Chicago, the Joe memory that was constantly coming up was how much love he had to give. He wanted everyone to be happy, to be laughing, to be having fun. That’s what the Neumuller house is – the fun house.

Growing up, whenever we were at their house, it was for a party – whether or not it was formally a party was irrelevant. While they hosted an array of amazing annual parties, every hangout was a celebration in itself. It was a dream as a kid – they ran a daycare which meant that space to play was plentiful. We spent hours climbing the large rock in their front yard only to be pushed off. Hide and seek was on a whole new level complete with long discussions as to where exactly out of bounds would start. Every winter party came with the promise of hours spent in the hot tub, daring each other to open your eyes underwater or run into the snow.  The intercom system in their house was used as a way for his sister Jackie and I to communicate with our brothers during playdates and sleepovers. We all played for hours until Jackie and I inevitably made our way into her room and fell asleep on her ladybug infested floor.

Joe was a brother to us in every way possible. Whenever we played flag football, he showed no mercy on me whenever it turned into tackle football. I didn’t get a free pass from him and my brother throwing me to the frozen ground then sitting on my head. He dated all of my best friends… though I did date his neighbor, so I guess we’re even. Whenever a boy talked to me in high school, my brother and Joe would run up to him and scare the shit out of him before turning away and cracking up hysterically. My dad affectionally slapped him across the head more often than not. Every new year in high school was brought in by streaking down their street banging pots and pans and the only scar on my body is from falling on a saw at the Neumuller’s house while we were playing in the dark.

He loved everyone, hard. He would do anything for the people he loved. He had a loyalty to him that was unlike anyone I know. He absolutely loved his family, was infatuated with his girlfriend, Mina, and was a member of the greatest group of friends I’ve ever known. My brother and Joe’s core friend group is made out of outstanding individuals that have been friends since the day they met. While they’re always open to initiating new members, it’s incredibly rare for anyone to drift away. They’re the type of best friends everyone hopes for.

The best marker of a good friend is never knowing when they’re going to show up at the door, and never minding when they do. Some of my fondest memories of Joe are from days that he just stopped by and ended up staying for dinner, a baseball game after and then slept on our couch for two days. My favorite Christmas included him riding along with my brother and me while we were Christmas shopping then coming over the next day to spend Christmas Eve with us. My mom and I were just sitting there, getting a little toasty after dinner, and Joe showed up to come to mass with us.

The best recent memory that I have with Joe was the day I was going back to Chicago after a visit home. He picked me up and we were driving around as he asked me about comedy, writing and everything I was doing in Chicago. He told me that he was proud of me for going after what I wanted. He talked about how I used to sing and act and how it all just made sense. He went on about my blog posts and how much he loved reading them. We spent the entire ride talking about my life since I left Danbury and the person I morphed into. That’s who Joe was – the most supportive, loyal person you could ask for. He never held back telling you that he was proud of you and supported you in everything you did.

I’m just one of many who misses the shit out of him. I’m angry and confused and in denial. I’m mad that he was in that accident. Furious. I can’t, and don’t want to, make peace with it. I keep thinking that I’ll see him again. That I’ll get to talk to him about what I’m doing. That we’ll be able to pile into his truck for a night out that ends at the Eveready Diner and with a fishhook stuck on someone’s ass because they sat in the trunk. That he was just out of town and when I go back home I’ll be able to stop by and spend time with everyone in his family, including him. That he’ll just pop up unexpected in our house on my next trip home yelling “BIIIIIIIRD!”

The harsh reality is that it’s not going to happen. We have to keep living and the only way I can see that happening is by keeping him alive too. By having love practically gushing out of our pores. By stopping by to see old friends. By laughing to the point of being incomprehensible. By taking our relationships, family and friendships as seriously as Joe did.

After my dad died, The Neumuller family didn’t let his memory die. Even when I tried suppressing it, the entire Neumuller family kept him around. They still do. When we’re together it’s as if all the memories of my dad happened yesterday. They never forgot him or let him become some ghost that we’re not allowed to talk about… they talk about him like he’s still here. I vow to do the same for them. I know that one of the biggest fears of the family is that we’ll forget him. And I assure you, we won’t.

I’m not religious, so I really don’t have a concrete idea or belief when it comes to the afterlife. But I have a very vivid picture of what I can only hope went down the day Joe died. I imagine my dad sitting somewhere, with a cooler of beer next to him. Jackie helped shape this vision by placing my dad on his red cooler watching the Superbowl. Then I imagine Joe walking up and my dad just looking at him and going “Fuck…. You too?” then Joe nods and my dad cracks open a beer, tosses it to him and they watch the game together.