Tonight I was on the bus home from a long day of work and decided to flip through my Instagram. That’s when I realized it. I’m doing exactly what I dreamed of doing just five short years ago. Looking through my damn selfish social media account was what I needed to be proud of myself. By the way, my life is way more interesting through the lens of my iPhone (@AnnieRoseTaylor)

Ever since I could remember, I wanted to perform. When I was little, I would put on shows at every family gathering using anything I could find. I wrapped a brown blanket around myself and became Simba, I threw on my rollerskates and tutu to become a disco rollerskating ballerina and with a pair of socks, my brother and I turned into a couples figuring skating team competing in the Olympics (we still call him Brian Boitano for this…)

The problem was that I wasn’t really able to get the resources needed to thrive where I was. Our school didn’t have any dramas or comedies… it was always a musical. While I loved performing in these, I was never the best singer or dancer. I never really got the opportunity to be great. I stopped thinking about performing and starting focusing on more practical career paths… I always did want to teach.

When I was 16, what I now called the Miracle at 30 Rock happened and I was able to hang out on the set of SNL. I was obsessed. It was like shoving alcohol down the throat of an alcoholic for the first time. My obsession had nothing to do with the celebrities around me… honestly, I didn’t really care about that. It was the atmosphere. Something was in the air – everyone was fooling around with each other, having fun and they were genuinely happy. I wanted that.

So I did what comes naturally. I went home and stalked the lives of the cast members… read everything I could find online about them. What resulted was a new mission to take classes at Second City. They were expensive, and I had to basically tear my mom’s arm out of her socket, but that summer I hopped on the train to Manhattan for my very first class. RIP Second City Training Center, NYC. 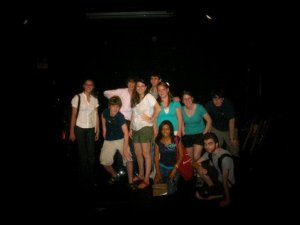 I loved every second of my classes. I felt like I was finally good at something – making people laugh. I didn’t even have to try, it just happened. It wasn’t so much about the actual classes… again, it was the atmosphere. I was finally surrounded by other teenagers who understood me. Who were fun, quirky and just wanted to have a good time. From that point forward, I had two major goals – to live in a major city and to study comedy.

It wasn’t easy. I had to convince my mom to let me go to college in Chicago. While I claimed the move was influenced by my desire to go to DePaul, it was really the opposite. I had to find a reason to get to Chicago and I knew that DePaul was my gateway in. While I know it secretly killed her, my mom helped me figure out a way to make it work. At 17 years old, she dropped me off in the middle of Lincoln Park and I started the journey of a lifetime. I went straight to work, trained hard, got employed by Second City my first year out of college and am now the star of my own sitcom.

Just kidding. The exact opposite happened. I joined a sorority, partied hard, dove into my double major and helped start a 24-hour dance marathon on campus. After graduation, I got a job right away and performed above and beyond my company’s expectations. I actually started to joke about coming to Chicago to study comedy… I was that far removed from it.

Eventually, things have a habit of coming back. I found myself unsatisfied with the 9-5 lifestyle and needed to spice things up. I enrolled at Second City and the rest is history. I finally reached my goal – I was living in the city and studying comedy.

It all came full circle. It’s not so much about physically being on stage and I’m honestly okay if my comedy career never goes beyond the end of my program. It’s about the atmosphere & the fact that I’m finally happy. In the past year, I met some of the most amazing people in my life. Looking back, I know the 16 year old version of myself would be incredibly proud.

So here’s what I asking of you. Think back to what you used to dream about… what did you really want out of life? How far away are you from those goals? What is keeping you from living the life you always imagined? It takes a little hard work, but if you just move a step towards your goals each day, you’ll get there.

Sometimes I look back and think of how lucky I am to be where I dreamed of years ago… but then I realized that I put myself there.